When searching for A10 help, I have come short most of the time. The good thing about A10 AFlex rules, is you can reference F5 iRule documentation, because they are both based on TCL. But for any other operational or troubleshooting tasks help, I am not so lucky. Coming from an F5 background, I would like to start a short series to log some of my findings when working with the AX series ADC, such as basic A10 commands, syntax and troubleshooting methods.

Similar to the F5 (post 9.x), A10 AX also have a very useful command line but with some tasks the GUI much cleaner/faster.

The F5 you had your VIPs (virtual servers) which were tied to a specific IP:Port, which would be directly tied to a pool with pool members (server nodes). So typically you had multiple virtual servers for the same IP, if you needed to expose multiple ports.

Things are designed a bit different in the A10, you will see instead:

Where your Virtual server, you will only have one of, per IP address. In the VS configuration, you will have port mappings, which are known as 'Virtual Services'. They map VIP ports to service groups such as:

So looking back at A10's configuration hierarchy, the Virtual Server is just an abstraction layer in the config hierarchy that makes the GUI feel cleaner. You have one Virtual Server per IP, which is represented as one page for configuration in the web UI. From there, you will configure ports to direct requests to specific Service groups. But wait.... what about 'Virtual Services'? These are generated when you map the port to SG and to edit, you will be brought to a new page for configuration of each Virtual Service. In the text configuration, they will be noted as _10.1.1.1_HTTP_80 if you happened to map port 80 as HTTP to VIP 10.1.1.1. This is nothing daunting, just a little different and with an small learning curve for someone with F5 experience.

As far as the look and feel, the GUI is very easy 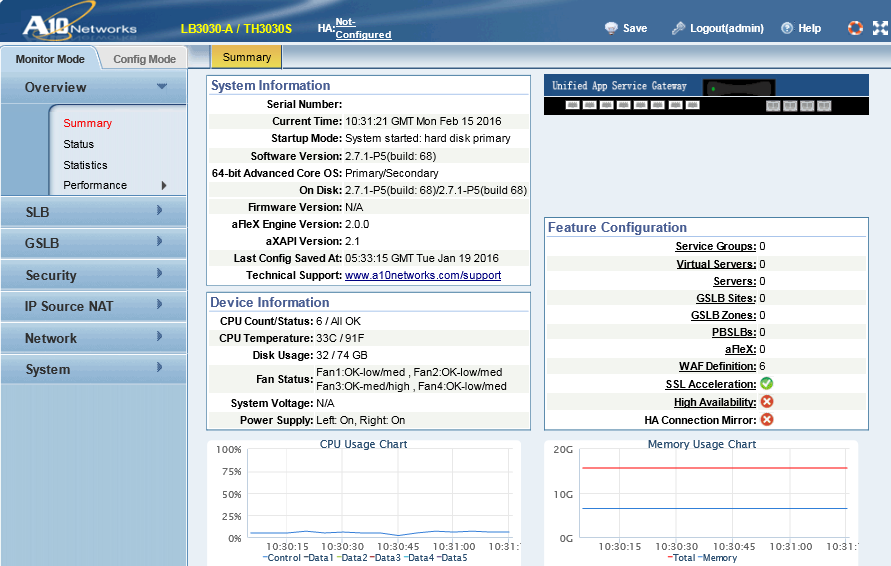 above picture is Thunder series, not AX but OS is the same

The UI is broken down into 'Monitor' and 'Config' modes. Monitor, you may see graphs and counters in relation to the objects that you are looking into, where Config is strictly for configuring.

The A10 has a proprietary HA engine, where there is a Active/Standby node but also a VCS Primary/Secondary. You make changes on the VCS Primary but the traffic will flow through the Active node, which doesn’t always mean you need to make your changes on the “Active” node. As far as network interfaces, or in F5 talk, Self-IPs.. These are controlled via VRRP. You can have multiple VRRP domains or you can throw all your networks into the default VRID domain.

Hope this helped as an introduction. I will write a few posts in the near future about basic configurations and also troubleshooting methods using the tools present on the ACOS CLI.

A cool tip here if you've ever lost access to your primary or secondary SRX device, you can still access them via another cluster node.

For example, if you want to gain access to node1 in the cluster from the Primary device, node0, you can do so using the 'request routing-engine login node <node_id>' command syntax as instrumented below:

This is very helpful if you don't have OOB serial access oryour company operates it's application environments in co-location facilities and it's not as easy to walk over to the DC and plug in a console cable.